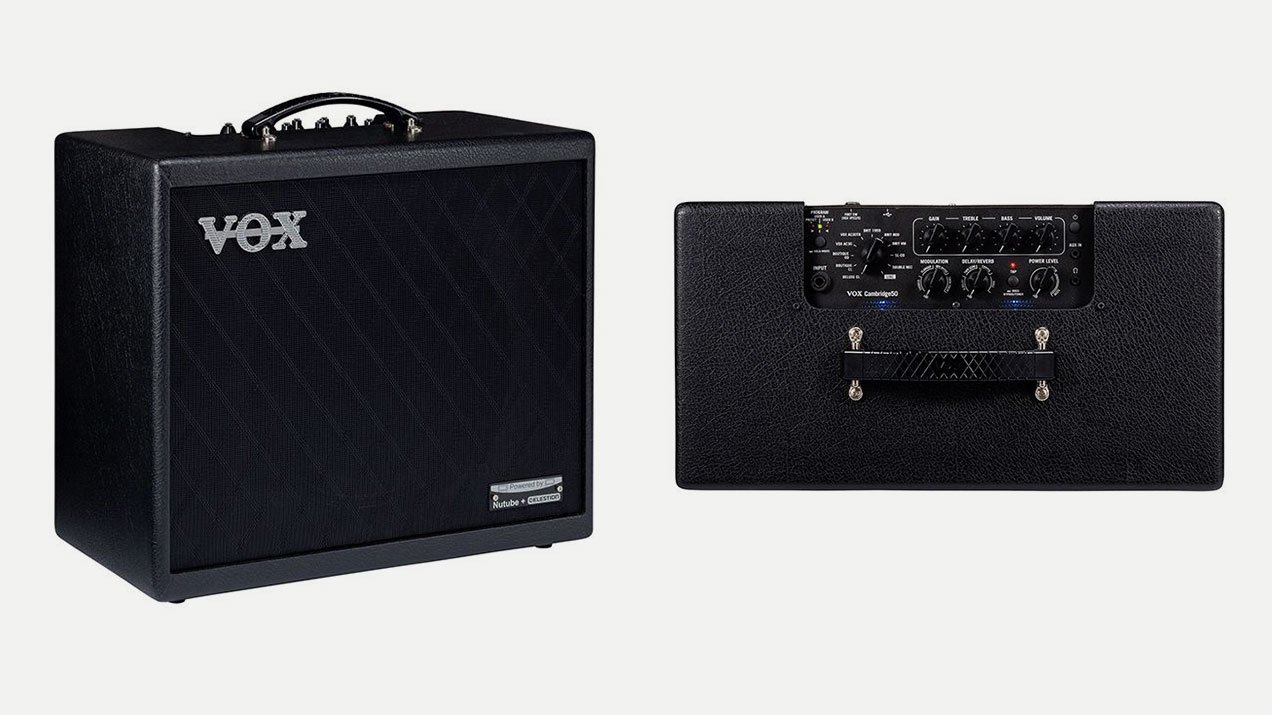 The Vox Cambridge 50 modelling amp has been getting some rave reviews since it was launched in the UK last year and we have had one in our studio now for a few months.

With Nutube technology to give it a warm valve like sound, a 12″ Celestion speaker and a great range of tones this will definitely being staying here!

Modelling amps at this price (and higher) can have complex controls and a manual that looks like a book (and that’s just the English version), which tends to put me off straightaway – give me some simple controls, limited fiddling and the ability to get a decent tone straight out of the box without reading the manual for hours and I am happy!

The Cambridge 50 has this covered. No screens – unless you plug it into the Vox ‘toneroom’ app – easy to understand controls, a Celestion 12″ speaker and a master volume. What more could we want?

Unlike many modelling amps that have presets to add in effects like delay, chorus, reverb etc but this one doesn’t, leaving you to add this if you want it. It has two effect controls that can be switched off but allow you to add two effects (modulation and delay/reverb) if you want them.

I have found that a lot of modelling amps (Line 6 comes to mind) don’t have what I would call a basic clean tone, tending to sound dull and muddy on their own. The Vox does – put it on Deluxe Clean or Boutique Clean with Gain, Bass and Treble at 12 o’clock and it sounds bright and characterful straight away, which is a good base to work from.

We have tried all the models and played around with the Gain, Bass, Treble and Volume controls to get some really good sounds out of each one, using a number of guitars (humbuckers, single coils and P90’s).

You can save the settings for two channels (A and B) and toggle between these using the optional footswitch. We saved a Boutique Clean which sounded top draw with single coils and a Brit 1959 which gave us some great overdrive tones.

The Delay and Reverb are good and realistic sounding adding subtle or full on effects (we like the Hall Reverb setting most) as are the modulation effects. To add more then two at once we used our pedalboard…

If you want to tweak the sound further the Vox Toneroom App lets you add more effects and also has a Middle control, which is useful if you are recording.

This thing is loud and the Master Volume works really well going from OFF to 50watts. Add in a headphone socket, aux in and a USB and everything is covered.

Check out the Amazon Vox Store