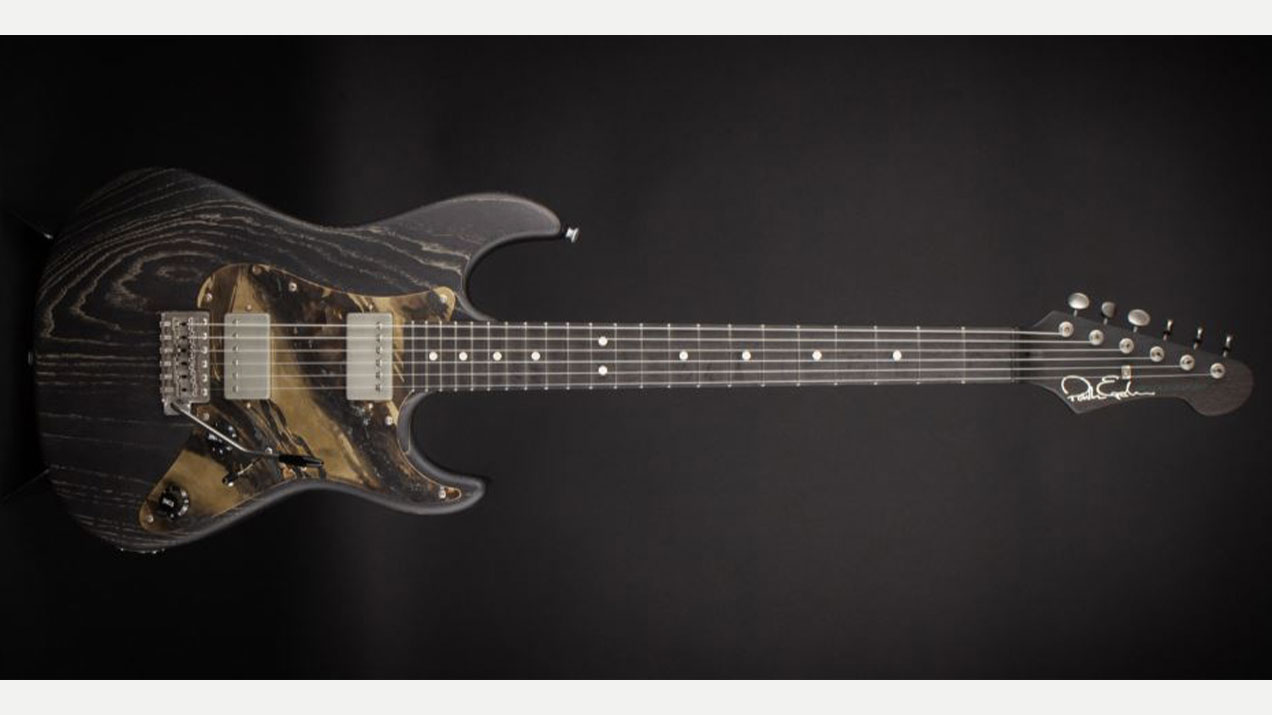 Great British gear means you are spoilt for choice.

In the last few years the Brits have started to make some fantastic gear again to challenge the ‘default’ brands from across the pond!

Be it pedals, amps, acoustic, electric or bass guitars we can boast some of the best gear in the world, all made right here and available instore or direct, rather than just a custom order.

Here are fifteen brands you should check out: 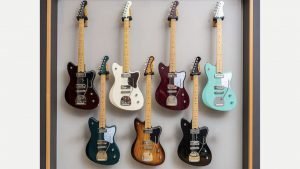 Originally established in Manchester in 1974, but now based in Northamptonshire since 2015 when they became part of the Auden Musical Instrument Company, Gordon Smith make handcrafted, custom built guitars.

Gordon Smith produce a range of single cut, double cut, no cut and semi solid guitars and can claim to be the longest running contemporary guitar company in England.

Their guitars are attractive, solidly built, practical, well designed, yet simple, extremely playable and reasonably priced for working musicians. “Born to Punk parents, used and abused by British Rock, thrashed by Grunge, soothed by the Blues, and the cornerstone of Indie”. 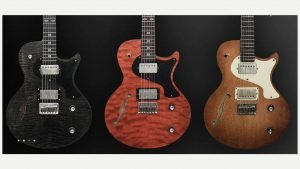 PJD Guitars was founded in 2010 by Leigh Dovey. Leigh started working with a basic knowledge of wood work picked up from his father and was lucky enough to inherit his tools as well as a small home workshop.

Fast forward to 2017 and a move up to York to a bigger workshop, and for the past 3 years Leigh has been putting his heart and soul into building the best instruments he’s ever built. Standardising his prototype models like the Carey and St John, Leigh now has more models in development and wants to bring even more British hand made PJD guitars to the guitar industry.

The PJD Carey Elite, Carey Custom and Carey Standard have all received a 9/10 review in Guitarist magazine (UK). Their latest – the Woodford brings a UK hand built S type guitar, finished in a choice of ten colours, to the market. 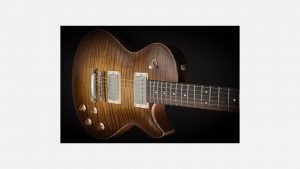 In the 30 odd years since Patrick James Eggle built his first guitar at school he has gained wide experience of designing, building and repairing all types and styles of guitar. In the early nineties he managed the production of solid body guitars at the Eggle company in Coventry, but by 1994 he had left the company to work alone, filling his time with repairs and building bespoke stringed instruments.

Now only making electric guitars which have won some of the best accolades from the industry. Models include: Macon Single Cut, Macon Junior, The ‘96’-Vintage, The ‘96’-Contemporary, The Oz. 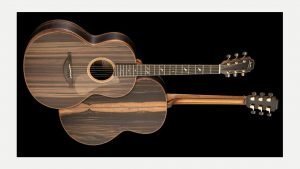 George Lowden is an acoustic (steel and nylon strung) -and now electric as well – guitar maker, based in Northern Ireland. Lowden guitars are currently handcrafted in a small workshop under the direct supervision of George. Their first guitars in 1976 had A-frame bracing and dolphin voicing profiles which established the Lowden guitar’s distinctive and unique sound.

Recently they have teamed up with Ed Sheeran – the resultant ‘Sheeran by Lowden’ range of newly designed guitars have taken the market by storm.

They offer aspiring musicians a guitar with great playability and tone using materials with high sustainability credentials, all designed and built in Ireland. 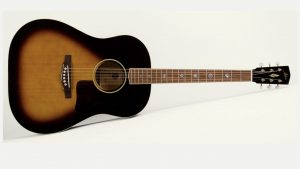 Atkin Guitars, established 30 years ago by Alister Atkin, continue to receive top reviews in the music press including a 5 star buyers Choice awards from Guitarist Magazine and Guitar Magazine.

Now for the first time ever Atkin Guitars are available in the shops. Their range of guitars includes the  Slope Shoulder, Essential, 37, Jumbo and Signature series.

They have also just released a new range of electric guitars – S and T styles that “retain the aesthetic of the golden era of solid body electric guitar”. 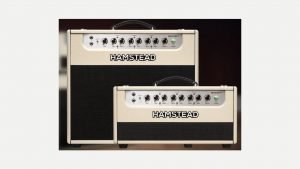 Hamstead Soundworks was born out of the fusion of two obsessions; one for tone, and one for electronic design.

The small and dedicated team is based in the UK and they build all of their products with quality and precision at the core of everything they do. 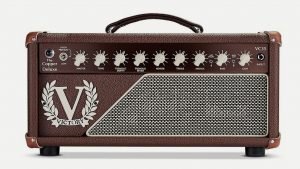 Victory make no-compromise valve guitar amplifiers and are making a name for themselves with a growing roster of artists and followers.

All Victory amps are designed, engineered and hand-built in the UK to exacting specs, using the very highest quality components. The amps are aimed at discerning players looking for the ultimate in valve guitar tone. Head designer Martin Kidd is well known in British amplification circles and takes a modern-boutique approach to design and specification, using meticulously hand-wired tag boards and high quality circuit boards and components.

Their range includes the Duchess Family, Jack Family, Copper Family and Kraken Family as well as a range of pedal pre-amps. 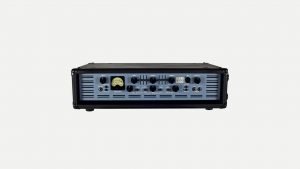 Ashdown was founded in 1997 by former Trace Elliot MD Mark Gooday. Ashdown quickly became a firm favourite of bass players around the globe.

Known for their cool styling, tour proven reliability and superb tone Ashdown bass amps are now being used around the world by bands and artists such as Foo Fighters, U2, Pino Palladino, Radiohead, System Of A Down, Biffy Clyro, Arcade Fire, The Stranglers, The Who and countless others.

As well as bass amps they also make guitar amps, all hand crafted at their factory in Essex UK. 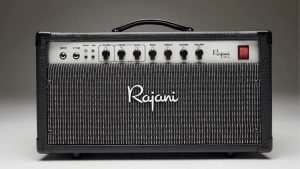 Rajani Amps are a new boutique amp manufacturer based in London and released their first products in later 2019. Their amps are not ‘copies or derivatives of vintage amps’ but designs that they want to become classics in their own right.

The amps are custom made, one at a time in their London workshop, with cabinets hand made by a local craftsman. Each amp undergoes rigorous testing to ensure unsurpassed quality and a lifetime of reliable service. 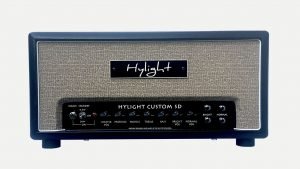 Hylight Electronics are a British amplifier manufacture based in London. Since 1964, Dave Reeves has designed the best circuits for all-purpose guitar and bass amplifiers featuring classic British tone, high headroom and reliability.

They have now developed their designs further in order to offer modern guitar players high quality military spec hand-wired amplifiers with optional features such as line output, effects loop, power attenuator, gain boost and channel switching. All amplifiers are custom made in England with high-grade components as well as unmistakably high-quality English made transformers, the heart of all truly great amplifiers. Hylight amplifiers are all built to last a lifetime. 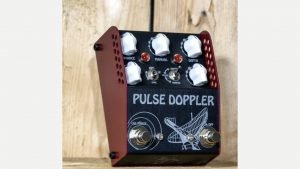 ThorpyFX, founded in 2014 by Major Adrian Thorpe, set out to produce the best sounding, most robust and most beautiful guitar effects available. This has been achieved through great design, great engineering and holding true to their ethos of providing “Superior Fidelity Tone Machines” to discerning guitarists.

Seems they are achieving this with every pedal released, judging by industry and user reviews and feedback. They now have fifteen in the range including overdrive – the Gunshot, distortion – the Warthog, fuzz – the Fallout Cloud and compression – the Fat General. 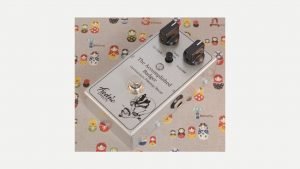 Fredric Effects, run by Tim Webster, make hand-made pedals with care in the UK,  these being boutique quality effects without excessive boutique price-tags.

They are known for being small and as fuss-free as possible – why have six knobs when two, with maybe a switch, completes the package?

Their large range of pedals includes the Golden Eagle, Accomplished Badger and Bug Crusher as well as the Hungry Wolf and King of Klone. 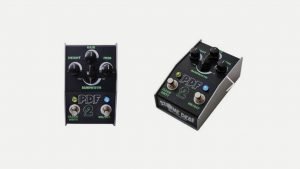 Stone Deaf produced its first pedal, the PDF-1, in 2010, using active circuitry. This active technology has shaped the foundation their range of drive, distortion and fuzz pedals: Warp Drive, Kliptonite, Fig Fumb, Trashy Blonde and the successor to our first creation, the PDF-2. 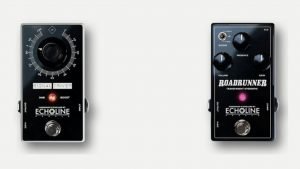 Independent UK boutique pedal maker, that specialises in fuzz, overdrive and distortion with a vintage flavour.

The ideas within their circuits were born from a desire to create the best quality pedals without compromise and they have been designing and creating pedals since 2008.

There are five pedals in the range including the Silicon Hi-Gain Fuzz, as well as boost, overdrive and  distortion pedals. 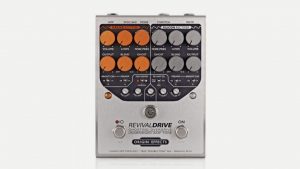 Origin Effects produce a range of compressor and overdrive pedals, individually hand-building every pedal as well as hand finishing them, utilising the same processes and materials used when they were founded, ensuring each pedal is expertly calibrated, assembled and tested to the highest of quality and specification.

Origin Effects is the brainchild of British audio-designer Simon Keats.

Shop effects in the Amazon Store